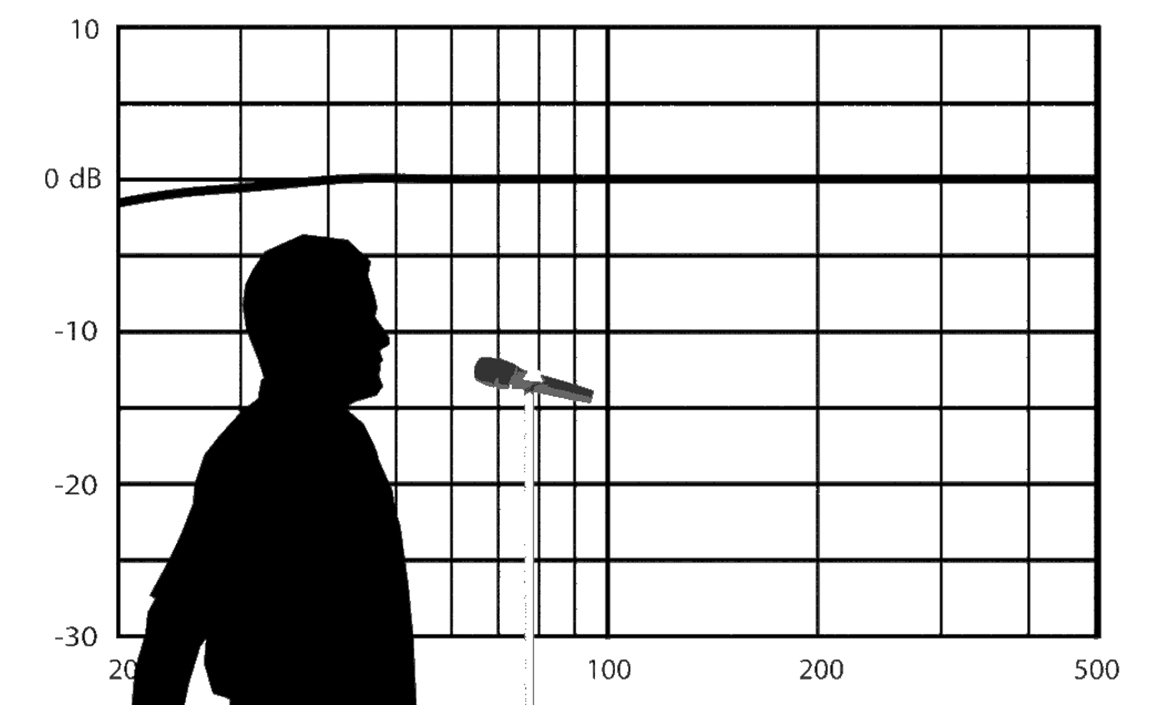 Proximity is when a microphone produces more bass by getting closer to the sound source (a point – or line source). This article takes you through some of the basics of proximity – and introduces a more advanced perspective on the phenomenon.

Figure 1 below, shows a calculation of the proximity effect of microphones exhibiting two different directional patterns: A figure-of-eight and a cardioid, both microphones on-axis in front of a point source.

Note that the proximity effect, by design, sometimes provides a flat response when the mic is close to the source (i.e., vocal microphones) – or provides a flat response when the microphone is further than 1 meter away from the sound source (in distant recording or the like). For this reason, when evaluating this information for gradient microphones (for example in a spec sheet), the distance at which the frequency response is neutral/flat should be stated. 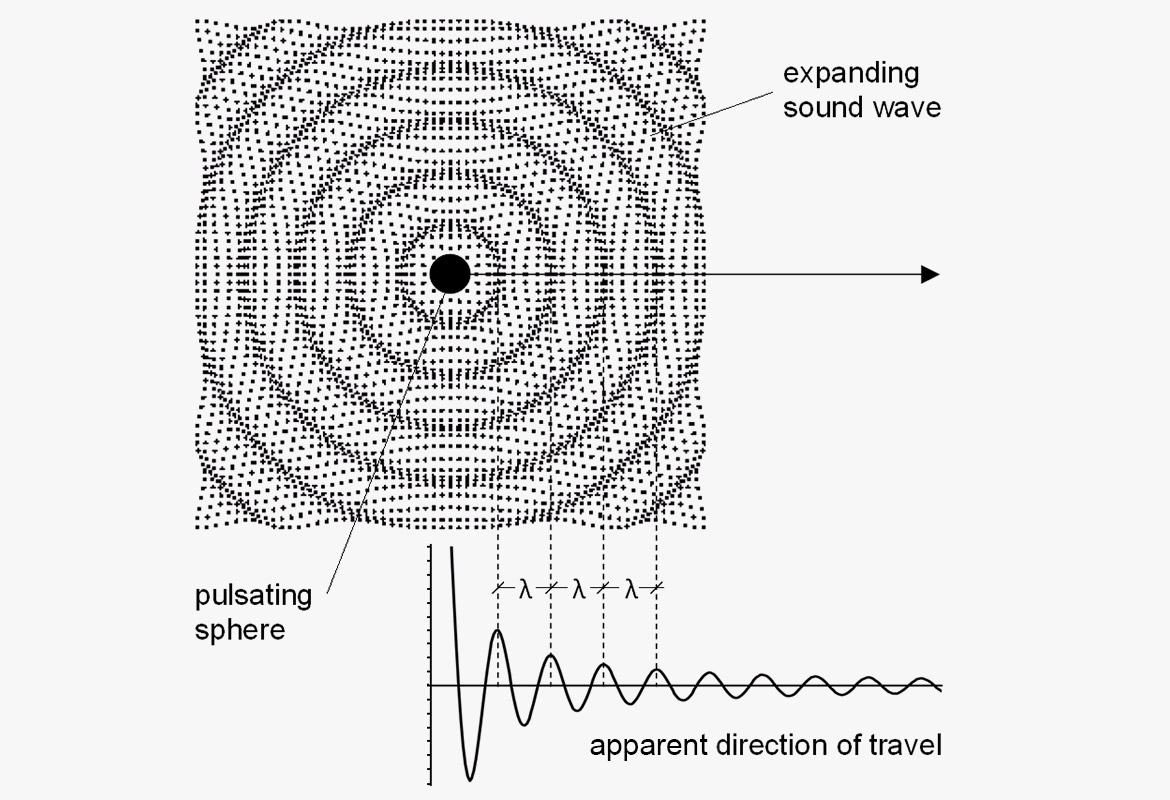 Figure 2. A point source is essentially a sizeless pulsating sphere. A certain amount of sound energy is generated and distributed evenly in all directions away from the point. The further away you get, the more the sound is diluted as the sound energy is distributed throughout a greater area. A microphone records -6 dB per doubling of the distance.

You would think that the world should be extremely noisy, having sound sources from which the sound level never drops. However, this is only the case if the plane sources have infinite size – they do not. Thus, any plane source acts as a point source at a distance. Below you can see a practical example of this phenomenon.

The sound source is a studio monitor (Genelec 8341A). This speaker has coaxial/symmetrical arranged membranes for low, mid and high frequencies, respectively. The cross-over frequencies are 500 Hz and 3 kHz.

The signal reproduced by the loudspeaker is pink noise. 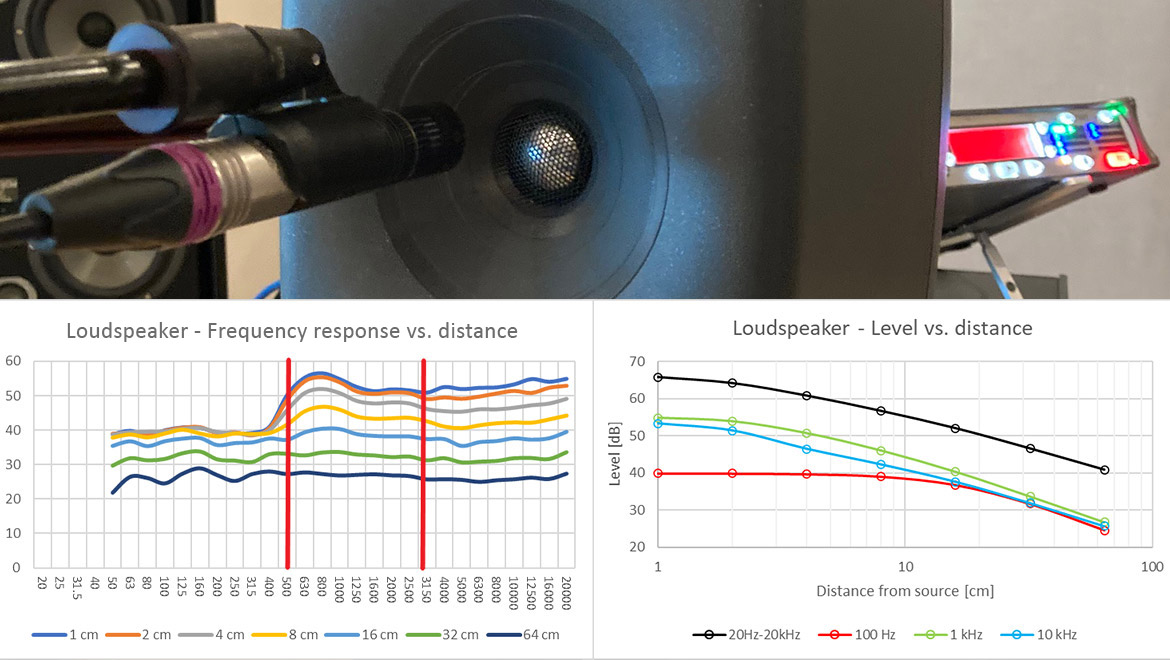 So, proximity exists only in gradient microphones. The explanation is that sound hits the diaphragm from both the front and the back. (There is an inlet to the rear side of the diaphragm). The pressure difference between the front and rear (the gradient) creates the diaphragm’s movement. The distance from the front to the rear is in the range of 1-2 cm. At a low frequency (exhibiting a long wavelength of several meters), the pressure difference across 1-2 cm of a soundwave is small. At higher frequencies, this difference increases (see Microphone technology – the essentials, fig. 4 and 5).

Apart from this primary gradient, there is another added pressure difference when you get close to the microphone (≤1 m). This is related to distance. If you have a sound source 2 cm from the front side of the diaphragm, then the distance to the rear is farther (let’s say 4 cm in this example). The distance to the rear side is now double the distance to the front. If the sound source is a point source, the sound pressure is attenuated by 6 dB from the front to the rear of the diaphragm. This must be regarded as an additional gradient. However, it only gets effect at low frequencies because the primary gradient is weak in this range.

To conclude, we have a bass lift when the microphone is close to a point source.

The equivalent sound source can be challenging to predict or define when it comes to musical instruments. Below you’ll find some examples.

Sometimes, the proximity effect does not come into play due to the instrument’s frequency response. For instance, a trumpet is basically defined as a point source. However, the spectrum does not extend to the bass range. Thus, proximity is not a challenge when recording this instrument.

Figure 4. Nearfield recording of a trumpet. The curves show the difference between a cardioid (4011) and an omnidirectional mic at various distances (the measurements are subtracted from each other). The instrument’s frequency range causes only a limited degree of proximity effect within the actual frequency range. The distance-based level difference is taken out (for easier comparison of curves).

A grand piano (the space just above the strings) is regarded as a plane source even though the individual strings might be seen as something else. The levels are relatively constant at 2, 4, 8 and 16 cm. There is no proximity effect (nothing to emphasize low frequencies).

Figure 5. Nearfield recording of a grand piano. The curves show the difference between a cardioid (4011) and an omnidirectional mic at various distances. The instrument’s frequency range causes no proximity effect. The distance-based level difference is taken out (for easier comparison of curves).

An acoustic guitar (microphones centered at the front of the top wood sound board, below the bridge) is a plane source at small distances. However, the spectrum is not that attractive in this position, so other microphone positions are usually preferred, mostly because the sound from the body hole is strong here.

Figure 6. Nearfield recording of an acoustic guitar (in front of the top wood sound board, just below the bridge). The curves show the difference between a cardioid (4011) and an omnidirectional mic at various distances. The distance-based level difference is taken out (for easier comparison of curves).

You might expect the drumhead of a kick drum to function as a plane source due to the significant diameter of the skin. However, its behavior is closer to a point source. The drumhead is not a pure plane source at any distance – so proximity exists. Therefore, care must be taken when selecting a microphone. It should not be too dependent on the gradient component.

The newly developed DPA 4055 Kick Drum Microphone is a gradient microphone with an “open cardioid” characteristic. It sits between “wide cardioid” and “cardioid.” This means the proximity effect exhibited is less than that of a cardioid microphone. However, it exhibits a complete low-frequency response, even at a distance. So, it gives the engineer the freedom to place the microphone at a convenient distance without the vibrating skin hitting the microphone.

Further, it is designed to manage the excessive sound levels around and inside the drum. This microphone does not necessarily have to point directly towards the resonator head, the resonator head hole or the hammer area close to the batter head. It provides excellent opportunities for experimenting with placement outside and inside the drum to pick up the sound with the right impact as the situation requires.
EBB 2022-04-13 / 2022-05-05